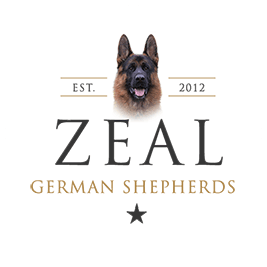 "We expect nothing less than excellent, while delivering more than expected"

This absolutely stunning young stud has excellent hips and elbows, strong bone structure, MASSIVE HEAD, absolutely clear in the head, the most beautiful and pronounced black mask we have ever seen, excellent drive and power, fully titled (IGP3) and recommended to breed (KKL). He has a superior pedigree and stellar genetically healthy parents and the son of the Current World Champion Male amongst numerous World Champions.

Brandy is a beautifully pigmented female and daughter of World Champion VA1 Gary vom Huhnegrab. She is world-class female that is extremely confident, courageous, has excellent anatomy, very deep black and red pigmentation, clear head, dark mask, and dark eyes. She has an excellent gate and desirable temperament. Brandy is bound to impress anyone that sets their eyes on her! She has excellent genetic-health and the makeup of a true World Champion German Shepherd.